What is Key Club?

Key Club is an international student-led organization in high school with opportunities and objectives to build leadership skills, character, and promote service activities throughout the community. Key Club itself is branched off of the adult version, Kiwanis, along with other clubs such as K-Kids (elementary school), Builder's Club (middle school), and Circle K (college). Fun Fact: The first Key Club was formed in 1925 in Sacramento, California!
For more information, check out the official Key Club website:
Official Key Club Website

Since Key Club is international, there are groupings to organize things a little better. So, each member of Key Club is in a club which is in a division, in a district. Westlake High School Key Club is in Division 42 East and the Cali-Nev-Ha District.

​International:
Key Club is an international organization with clubs on every continent but Antarctica. Key Club is led by a board of trustees who set the direction for the organization. The board is comprised of committees who guide the completion of the Key Club strategic plan.

Districts:
There are 33 organized districts and one district in formation. Each district, normally defined by state or nation, is led by a governor, who is elected by delegates at the annual district convention.

Divisions:
Districts are divided into divisions. Each division has a lieutenant governor, a student leader who carries out the district’s policies and provides support to the clubs. Divisions are made up of clubs consisting of a president, vice president, secretary, treasurer, and other committee members.

Clubs:
Key Clubs are established in a high school or equivalent institution. A community-based club may also be chartered. Elected officers can include a president, one or more vice presidents, a secretary, a treasurer, an editor, and one director from each class. 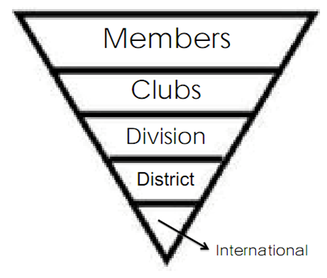 During the year, we have a lot of chances to volunteer. One of our big projects (connected with Key Club/Kiwanis) includes working with UNICEF with their ELIMINATE Project (helping eliminate maternal and neonatal tetanus). Some other service projects include the Give Back Game (Manna), Relay for Life (cancer) and so much more.

California-Nevada-Hawaii district is the larger scope of Key Club. When categorizing data such as membership count, money raised for PTP (Pediatric Trauma Program), and service hours, we use this 3-state lens. CNH regulates large-scale service projects, contests, makes monthly newsletters, and more. You can view all of this on their website:
CNH Website

I pledge, on my honor, to uphold the Objects of Key Club International; to build my home, school and community; to serve my nation and the world; and combat all forces which tend to undermine these institutions.